It has been a while since I covered AzureAD and AzureADPreview module updates, so I figure it’s time for another article. Note that some of these might not be all that new, since my last article on the subject was from April 2019 🙂

The first set of new cmdlets allows us to manage the “staged rollout” feature, as in the per-user switch from federated auth to cloud-only. This feature was first announced at Ignite 2018 and it took Microsoft a while to release the public preview, but it’s finally here. We will cover the feature in more details in another article, for now here are the corresponding PowerShell cmdlets (part of the AzureADPreview module):

Another great new addition are the cmdlets to search the Azure AD Audit and Sign-in logs. Up until now, if we wanted programmatic access to those, we had to use the Graph API. Being able to query the logs directly via PowerShell is appreciated. Unfortunately, I couldn’t get the Get-AzureADAuditSignInLogs cmdlet to work for me, but Get-AzureADAuditDirectoryLogs works just fine: 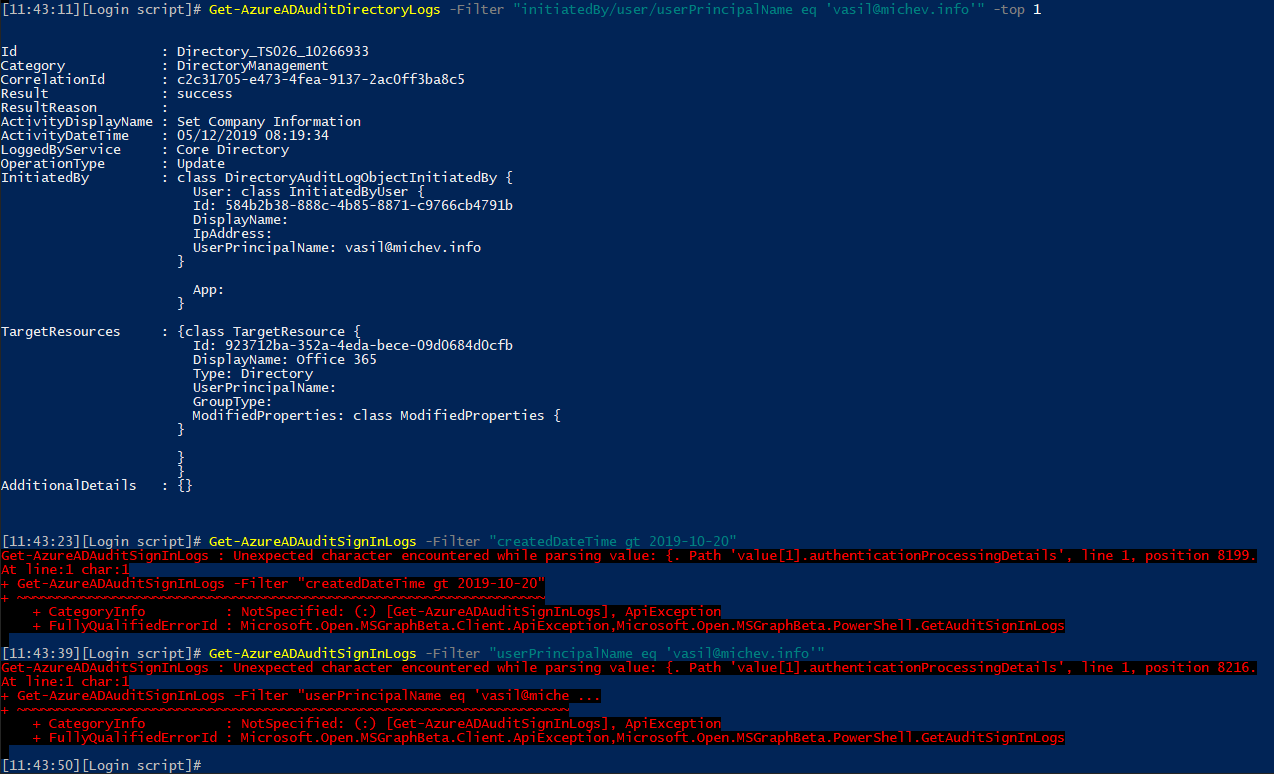 In any case, the two cmdlets are a great addition, and here are the links to their corresponding documentation articles:

Another set of cmdlets deals with Role management. The Get-AzureADMSRoleDefinition cmdlet outputs the role definitions of all roles or a given one, and once you have the role ID you can query for any assignments via the Get-AzureADMSRoleAssignment cmdlet. The rest of the cmdlets allow you to create and manage new role definitions and assignments accordingly, with the caveat that only the application-related permissions are currently supported. This functionality has been available for a while in the Azure AD portal and the PowerShell module, but we’re covering it here since we skipped few versions. Here are the rest of the related cmdlets:

While we are still on the topic of roles/permissions, the Azure AD Privileged Identity Management module has now been assimilated into the AzureAD module, meaning we can use the corresponding cmdlets to manage PIM roles and assignments for Azure AD roles and Azure RM resources. Well technically, you can only manage the Azure RM ones, as the Azure AD roles are still in the process of being moved to the new model. FWIW, creating a new Azure AD role assignment via the New-AzureADPrivilegedRoleAssignment cmdlet worked just fine for me, so you can expect full support for Azure AD roles in the coming weeks/months. Until then, here are the articles with details on each of the Azure RM PIM cmdlets:

And the corresponding articles for the Azure AD PIM cmdlets:

And in the last versions of the modules, released post-Ignite, the following set of cmdlets has been introduced:

The *-AzureADMSServicePrincipalDelegatedPermissionClassification cmdlets seem to deal with the new concept of assigning “classifications” to service principal objects associated with Azure AD applications. More specifically, the classification is basically a tag on any of the delegate permissions granted on/requested by the service principal, which seem to be used to indicate the potential impact that granting the corresponding permissions can have. Three values are currently supported: “Low”, “Medium”, “High”.

Lastly, a bunch of cmdlets dealing with Azure AD B2C policies have been added. Note that for any of these to work, you need to be connected to the corresponding Azure AD B2C instance!

When it comes to parameter changes, the following can be mentioned:

This entry was posted in Azure AD, PowerShell. Bookmark the permalink.