After years of unsuccessful attempts to deprecate the good old MSOnline PowerShell module and subsequent postponements for its end of life, Microsoft seems to finally be making steps in the right direction and providing actual replacements for missing functionalities. In this case, we’re talking about the set of cmdlets used to manage directory synchronization settings, most of which are now covered by a Graph API endpoint. Let’s take a look.

First, a quick refresher on the set of cmdlets involved. Apart from the Get-MsolCompanyInformation cmdlet, which can be used to check the status of directory synchronization and password sync, the last sync timestamps and the service account used, the MSOnline module features a set of cmdlets to get or update some of the settings controlling the dirsync process. Those include:

First, to get the current configuration, use a GET query against the endpoint: 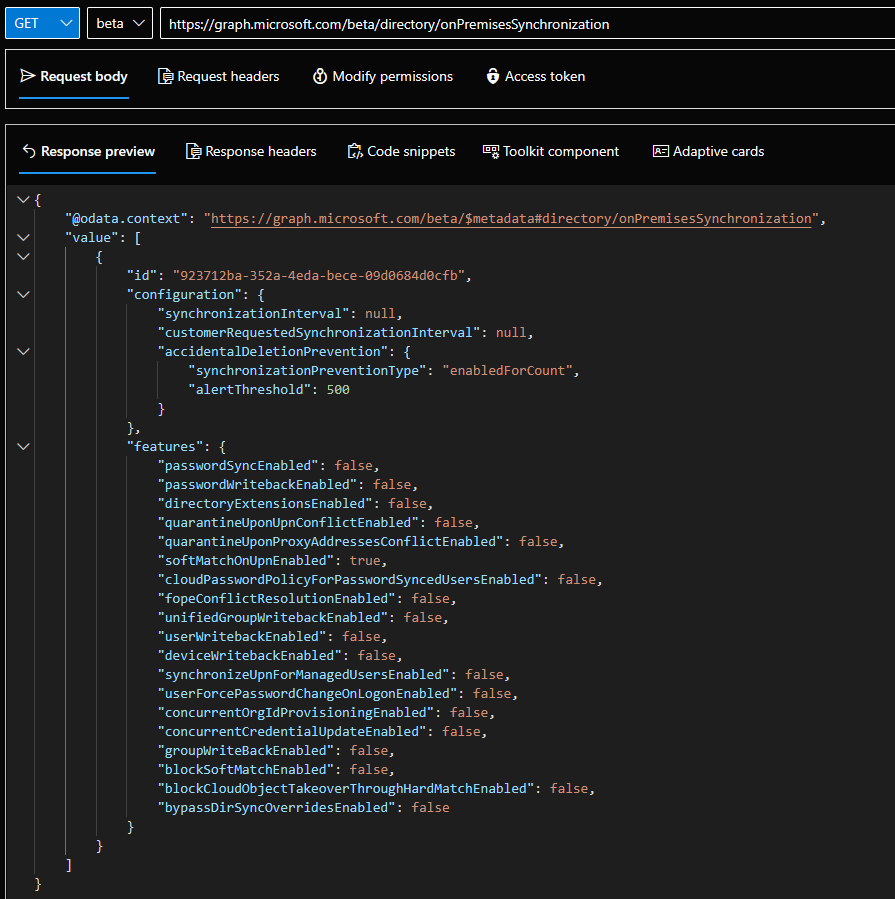 As you can see from the screenshot above, the settings are grouped into two sections. Configuration lists the accidental deletion feature settings as well as the sync interval settings, all bundled into a onPremisesDirectorySynchronizationConfiguration resource type. Features lists the settings for each feature, as part of the onPremisesDirectorySynchronizationFeature resource type. Do note that the individual feature names differ between the output of the MSOnline cmdlets and the Graph API. Lastly, we have the id value, representing the tenant’s objectID, which we will need in order to update the settings.

To update the directory synchronization settings, one must issue a PATCH request against the /directory/onPremisesSynchronization/{id} endpoint and provide a JSON body with the corresponding resource settings values. The OnPremDirectorySynchronization.ReadWrite.All scope is required in order to make change, so make sure you have it granted and are running in the delegate permissions model. The list of “configuration” settings you can update includes:

As an example, here’s how to update the alertThreshold value:

Next, we have the set of “feature” settings. Those include:

You can of course mix and match settings between the configuration and features sections as needed. Do note however that not all settings can be changed. And most importantly, none of the settings above allows you to actually enable/disable directory synchronization currently, as you might have already noticed. This is controlled via the onPremisesSyncEnabled value, which is currently NOT exposed via the Graph API. I’ll make sure to update the article once that happens.