Microsoft 365 Groups (previously known as Office 365 Groups or Modern Groups) have been around for few years now, and nowadays serve as the base building block for other services, such as Teams. When it comes to functionality, they are a strange mix between a shared mailbox and a Distribution group, combining some of the best features of the two recipient types, while at the same time omitting support for equally important ones. It doesn’t help that Microsoft has changed their “vision” around Groups few times already, only to clash with customer’s expectations again and again. Overall though, Groups are here to stay, and are slowly but surely taking their place as the primary tool to use in certain mail-related scenarios.

One such common scenario is the need to moderate message submission. Regular distribution groups, good old public folders and pretty much all other Exchange recipient types have long supported the moderation functionality, but Microsoft 365 Groups initially launched without moderation support. Until about an year ago that is, when support for moderation was quietly added. Or at least I missed any announcement around it, so this come out as a recent surprise when trying some PowerShell stuff. Anyway, Microsoft 365 Groups do support moderation now, and it works pretty much as you’d expect it.

To configure moderation for a Microsoft 365 Group, you need to use Exchange Online PowerShell, and more specifically the Set-UnifiedGroup cmdlet. The example below will turn on moderation for the “TeamOne” Group and designate one of its owners as the moderator:

You can designate multiple moderators as needed, and they don’t necessarily need to be owners of the group, or even members, however at least one moderator must be appointed if the functionality is toggled ON. Interestingly, some of the other parameters that control the moderation functionality for “traditional” recipient types do not seem to be currently available. These include the BypassModerationFromSendersOrMembers parameter (used to designate a list of senders that will not be subject to moderation) and the SendModerationNotifications one, which controls whether senders are notified in case their message was rejected. One additional parameter is usually associated with moderation controls, namely BypassNestedModerationEnabled, however as nesting is still not supported for Groups, we currently have no need for said parameter.

As for how the moderation functionality actually works, there are no surprises. When moderation is enabled, every message addressed to the Group in question will remain in the moderation queue until approved. Approval happens via Outlook or OWA, with the moderator being notified via email about any pending messages. A short preview of the message will be generated, with the complete original item attached in case more details are needed. From within the notification email, you can send to Approve/release the message, or Reject it, either by specifying a custom reason, or sticking with the default. The only other thing worth mentioning here is the funky sender name used for generating the notification 🙂 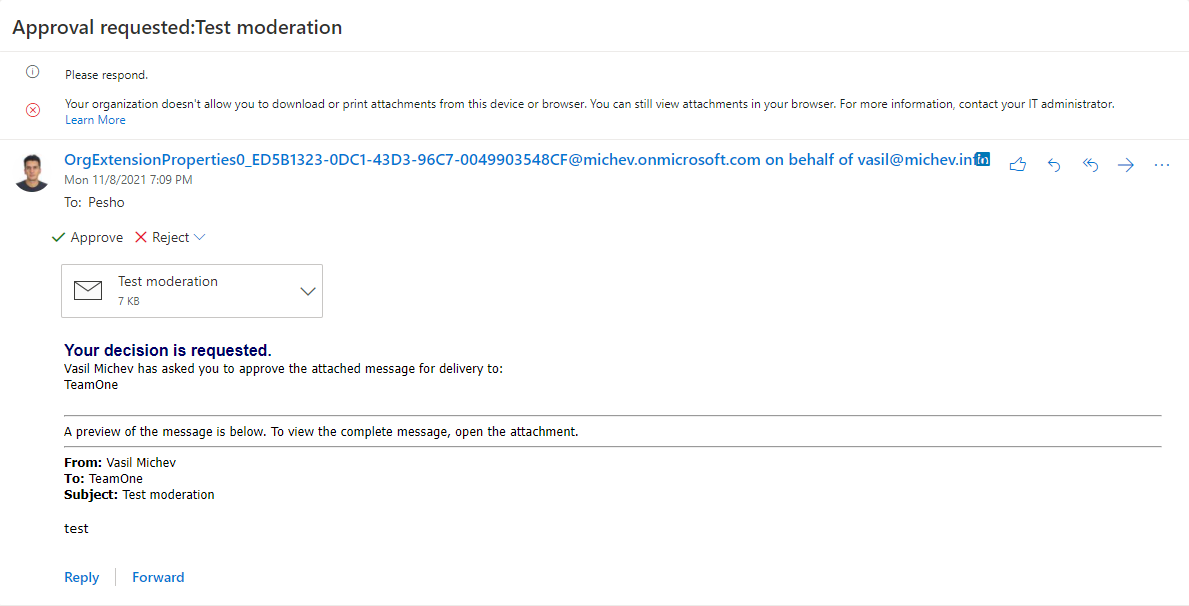 Once the message is approved, it will land in the Group mailbox, and that’s pretty much all there is to it. Left unattended, messages will expire in a week or so, so it’s good to have at least few moderators appointed, should you decide to use this functionality. Additional details on how the moderation functionality works, including detailed diagrams and FAQs, can be found in the official documentation linked above.

This entry was posted in Exchange Online, Microsoft 365, Office 365, PowerShell. Bookmark the permalink.

3 Responses to Did you know: Microsoft 365 Groups now support moderation